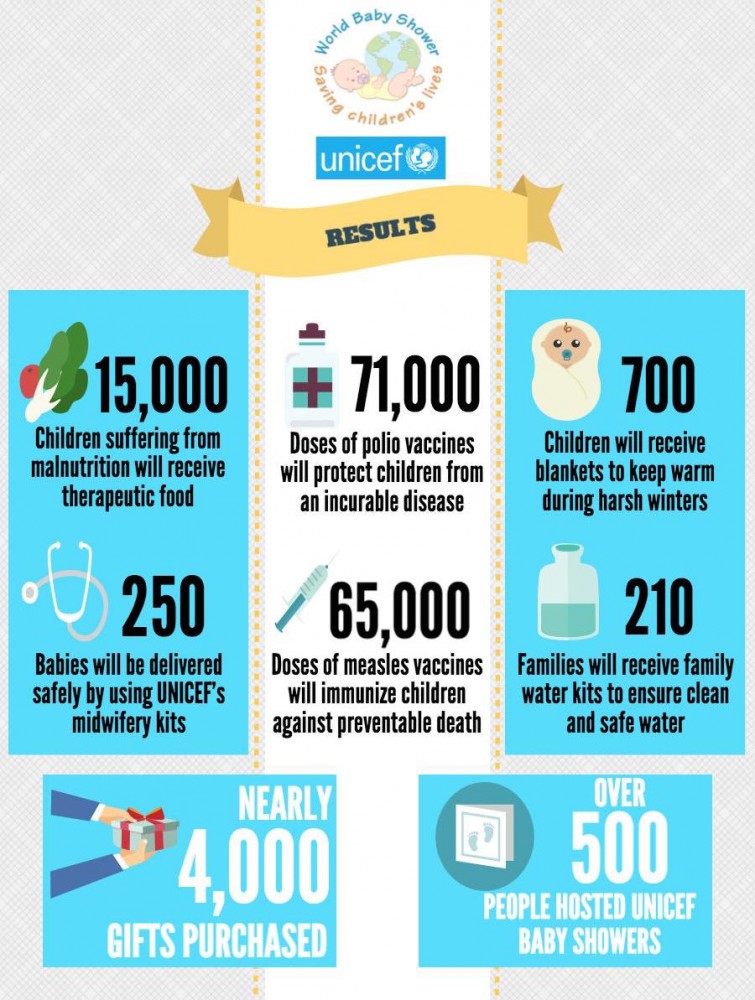 Life-saving gifts from fans and supporters of the World Baby Shower that singer-songwriter and UNICEF Goodwill Ambassador Shakira and FC Barcelona star Gerard Piqué threw ahead of the birth of their second child has so far raised almost $150,000 – and climbing, UNICEF said today.

“Gerard and I are so happy to know that so many kids will benefit from the generosity of all of those who have participated in the World Baby Shower movement—and that we’ve raised 130,000 polio and measles vaccines and enough therapeutic food packets to feed 15,000 children – among other things that will now go to children in need,” said Shakira. “What is most exciting is that more than 500 mothers have organized their own baby shower which has also helped even more children all around the world.”

UNICEF confirmed that the gifts from the supporters of the World Baby Shower, which launched in January, will benefit tens of thousands children by protecting them against disease and malnutrition, and providing essential items for their survival.

Some 71,000 doses of polio vaccines and 65,000 doses of measles vaccines will immunize young children against two potentially deadly diseases. From therapeutic food – to treat severe malnutrition in children – to vaccine carriers for health workers, to midwifery kits, the donations will continue to benefit children for some time to come. Fans have also donated hundreds of blankets – proven to aid the survival of vulnerable newborns by keeping them warm.

These gifts, along with family water kits, will help to prevent children from succumbing to the various diseases that threaten them and led to some 6.3 million child deaths in 2013.

Additionally, 500 people signed up to host their own showers, giving gifts for other children instead of receiving them for their own. Partners such as The Bump and Baby List have even incorporated UNICEF’s inspired gifts to their registry offerings permanently.

“This is an extraordinary show of generosity on the part of Shakira and Gerard, but also by the thousands of people who went out of their way to share in this event by giving to others,” said Shanelle Hall, head of UNICEF’s global supply operations, based in Copenhagen. “You could say this is Shakira’s biggest hit, and Gerard’s most spectacular goal. These gifts will reach tens of thousands of children with life-changing supplies.”

This World Baby Shower is the second for the couple, who welcomed the birth of their son Milan two years ago with a shower to benefit children in need. This second baby shower has already surpassed the total donations reached with the last endeavour.

“There is still a lot to do,” said Shakira. “Our greatest hope is that the world baby shower continues moving forward and that more mothers organize their own baby showers until every new mother and newborn worldwide can access the same vital life-saving tools to enjoy a safe and healthy childhood.”

Those wishing to donate, or to host their own baby shower can visit worldbabyshower.org.